Composing a Quilt: for Nicolas 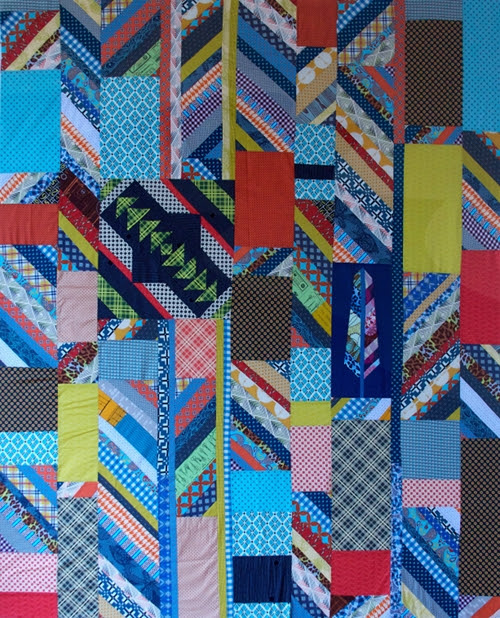 In Nicolas's quilt you can see the same general assortment of fabrics as Joseph's.  I actually had this one somewhat drawn out in sketch form before I started.  I knew that I wanted it to be columnar as well as have those columns vary in width from just skinny strips to wider rectangles of strip patchwork. I also decided to make all strip-pieced elements that were included sit at an angle.  So I used my quilting rulers to cut them on a bias angle from the original patchwork yardage that I mentioned yesterday.  This did create waste of course, but I have a lot of lovely scraps for other projects and I also shared a whole bunch of the scraps with my class at QuiltCon.  They seemed to like that.  I like being a scrap fairy when I visit classes.

What came about that wasn't exactly planned was the use of two "orphan blocks" and various larger rectangles of a single fabric print here and there.  You can see my first attempt at the "Flight Map" block (pattern coming out next month) in the upper left quadrant.  Then in the mid-right area you can see a stray patchwork feather.  This was also a test piece as I developed that block.  Both shared a sensibility with what I was working on in this quilt so they seemed to just work.  I also like them as more intensive and deliberate areas of the composition that might feel a little less expected and a delight when discovered.

The larger rectangles of single prints came about simply as I laid out the quilt on the design wall in order to balance color and give the eye a resting spot.  I may still yet float a flying goose here or there on top of some of these more simple areas, or perhaps even half-spheres peeking out from some more solid edges.... not sure yet. I like that even once finished, it will have an open-ended work-in-progress feel to it.  If a focused design balances my Joseph, then something with less structure and a little less rigidity might well balance my Nico's very focused, very intense nature.  Easy, boy.

These are not the best photos as it's been cloudy and they've just been shot up on the wall, still a little wiggley and wrinkley from unpacking them.

Hope you're having a good Tuesday.  The little lady in the womb is so kicky today it's almost making me dizzy.  Her movements are feeling so coordinated now, and she seems to just really like the boogie and completely flipping over- which she should enjoy while she can, we're both running out of room. Can't believe I'm beginning the last trimester.  Unless of course I look in the mirror.
xoxoAM
Posted by Unknown at 5:07 PM