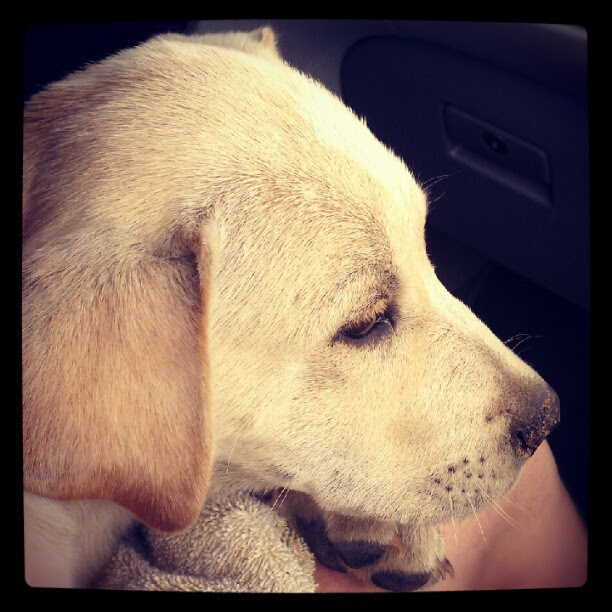 My father-in-law texted me a photo of two little curled up lab-ish looking puppies in the early morning of June 1st with the question "want another lab?"  He was on a business call in Columbia, Tn. which had him visiting a scrap metal working shop.  As he walked up to the office door two little, filthy puppies approached him, a little shiver-y after a rainy night (queue heart string yanking music). 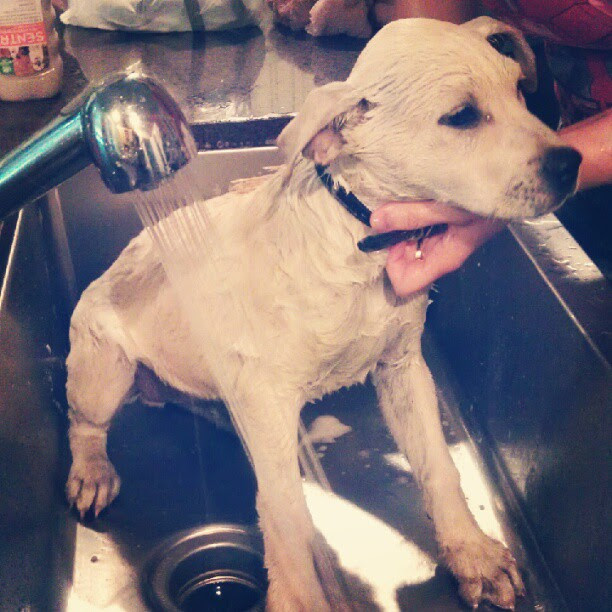 Our good boy Leo had a hard winter.  At not quite 8 years old we had him X-rayed to find some aggravated and swollen joints from a puppy injury, a bit of arthritis and evidence of his spine having fused and rebroken in a few spots.  Not fun stuff for a 100lb dog to deal with.  I spent lots of nights down on the floor with him, giving him nice slow rubs, to hopefully lessen his discomfort, and gave him some pain killers on and off when he seemed to just not be able to move.  One night he sat whining on the back porch because he wanted to come back in after his bathroom break in the yard- and I stood in the open door welcoming him, but he couldn't lift his hind end off the ground.  And he wanted to so badly.  He was just in so much pain.  I cried a bit with him, and in the cold dark, I convinced him to let me carry his back end while he walked his front end into the house, up a few brick steps.  It was as though he was more emotionally hurt than physically at the notion of me helping him.  We found his soft spot on the warm rug, where he spent most winter nights. 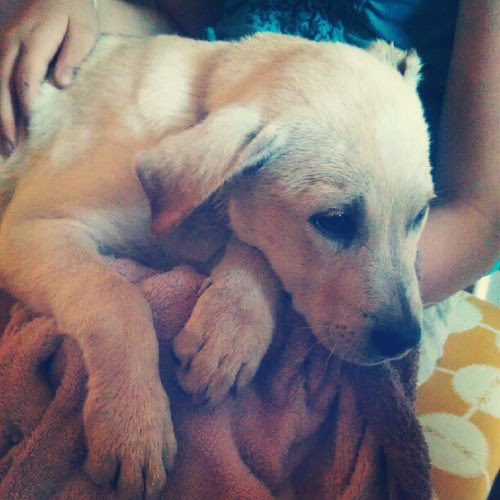 Some days we would see a little improvement, but most days I was reluctantly coming to the a slow realization that maybe Leo wouldn't ever get back to his happy normal.  Jeff suggested we think about going ahead and getting another dog, and the thought not only made me cry but infuriated me.  All dogs should be like Leo.  He is perfection.  He is gentle, beautiful, protective and spirited.  More than anyone could ever hope for.  I have felt sure that even if he could speak words, he would never utter one complaint.  I wanted nothing to do with another dog.  I couldn't think of another. 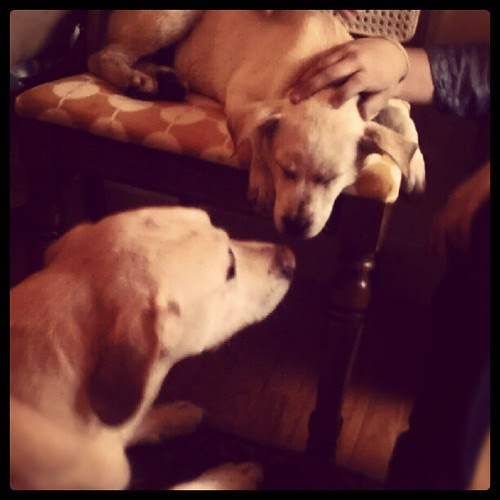 With the warm weather returning, so has Leo's mobility, comfort and old self.  He's even shared a family walk or two and seemed no worse for wear after.  It was after a few months of Leo back to his old self that I got the text from Jack.  I caved.  This little pair of puppies had been left there, likely just dumped.  No tags.  No houses anywhere for miles.  I checked all the missing listings and shelters that I could, but it appeared they were intentionally left.  So I set out on a trip, about an hour south, to have a look for myself.  Something in me switched on when I saw the picture.  Not just the puppies' need.  But also of Leo's gift.  What a perfect pet he has been.  And what a perfect teacher he would be to a new little one.  On how to be.  How to live with us. 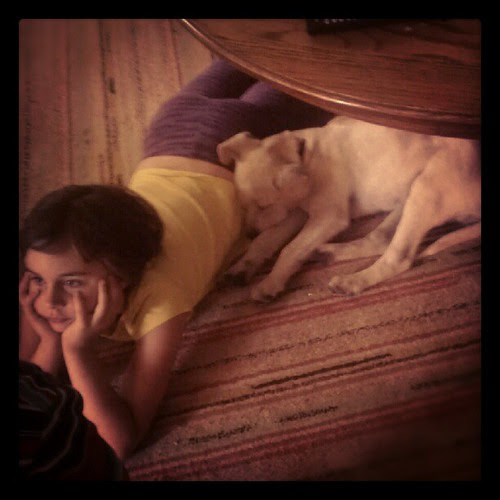 Deciding between the two puppies was agonizing, but better once a metal worker there had agreed to take home which ever I didn't choose.  So I took the one that didn't jump up and greet us right away.  I took the one that was napping through our whole visit and only looked up to make sure we posed no threat, then went back to sleep with a little tail wag.  I took the one that looked more like Leo. And he is settling in just fine. 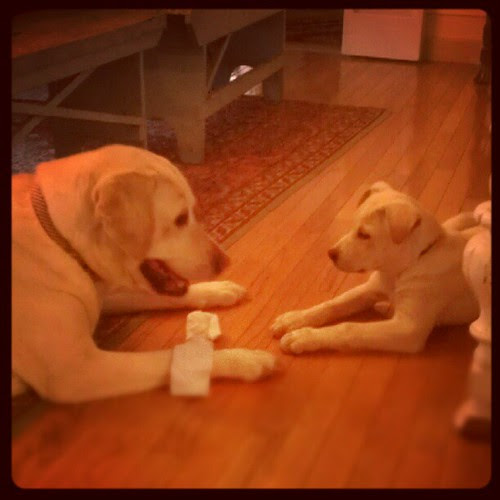 And Leo?  It's like I brought home a baby just for him.  The little one follows Leo and does as Leo does.  Leo is so tolerant and has developed one special growl for "okay, I'm done with the biting and rolling around thing for now".  Little one obeys, sits down and takes a big hrumpf sigh.  Then finds a sock.  Or a kid.  And goes right back to it. 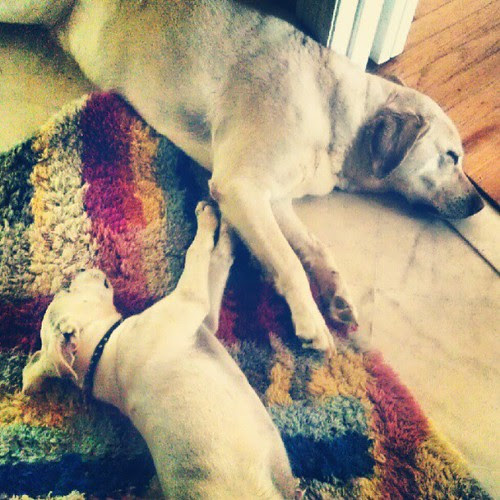 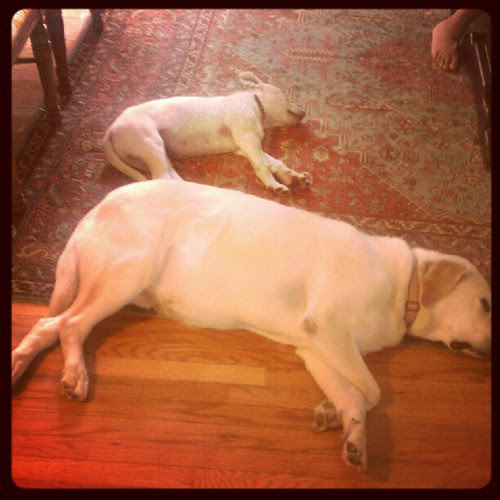 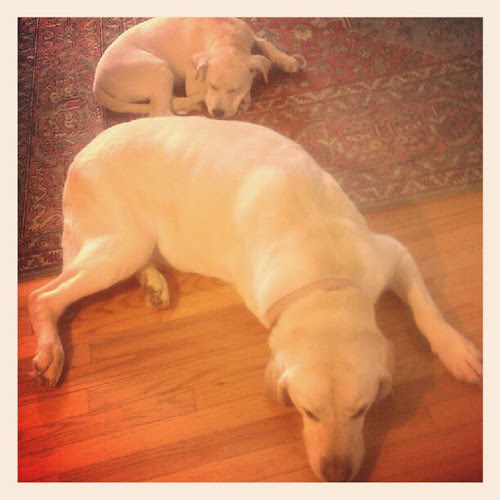 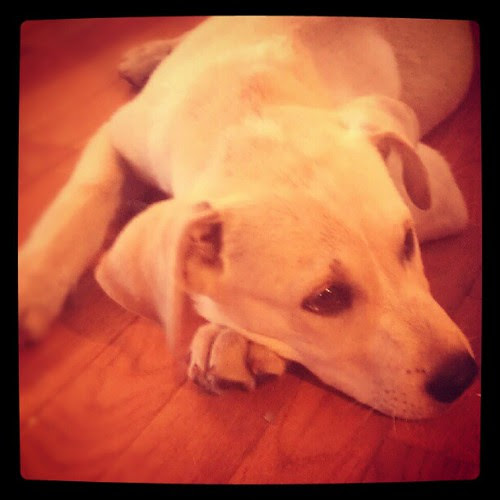 We named him Cash.  As in Johnny.  Getting left in a parking lot in Maury County waiting to be saved was altogether too southern and tragic not to name him as such.  And it was on the first day of June.  So.  We love him.  He is a lucky boy to have a perfect surrogate father, not to mention a flock of adoring people brothers and sisters.  Jeff and I sorta love him too.

So an early happy Father's Day to our Leo.
And, if you haven't guessed it, I'm instagraming @annamariahorner.  So if you want more play by play of puppies, what I eat for breakfast, what beer I nurse as I put on date-night makeup and other important details, just follow.