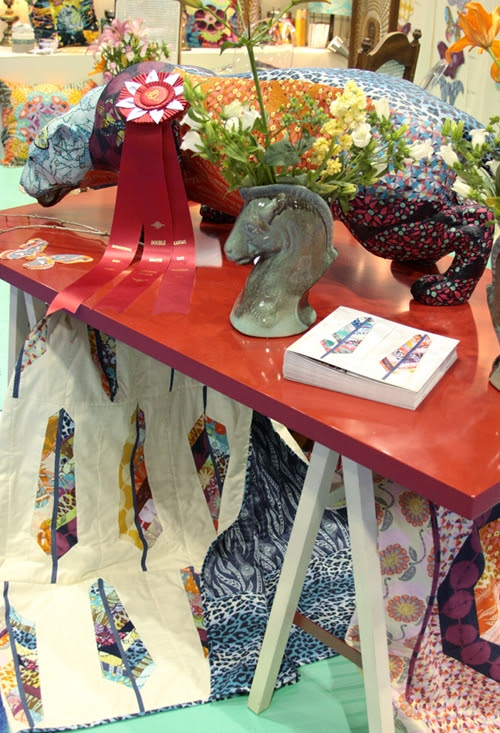 When I learned that I might not have any of my Field Study fabrics in the studio before market, I just about threw in the towel.  As I looked over my booth contract to see about getting a refund for the space it occurred to me that maybe there was a way to do it without fabric. 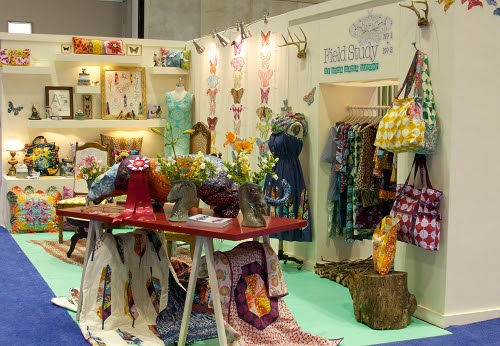 I was able to get my fabrics in a rush, piece by piece, but only receiving the last of them about 6 days before we left.  Lots of last minute sewing by several talented folks stocked the booth with samples.  But the whole design of the booth was created with the thought that all I would have would be one small strike off of each print. 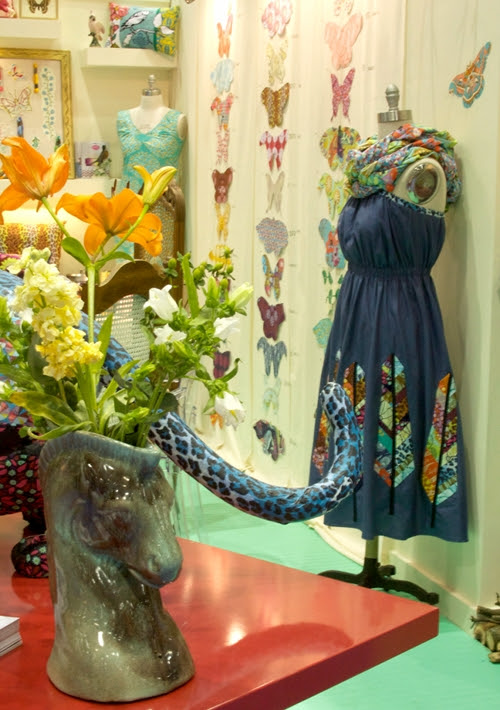 So the decoupaged leopard would have been painted.  The feather dress would have only had one feather appliqued. But I threaded my needle as we pulled out of the driveway to begin the hand applique of 8 feathers between Nashville and Kansas City.  Then I started to hand sew quilt bindings. 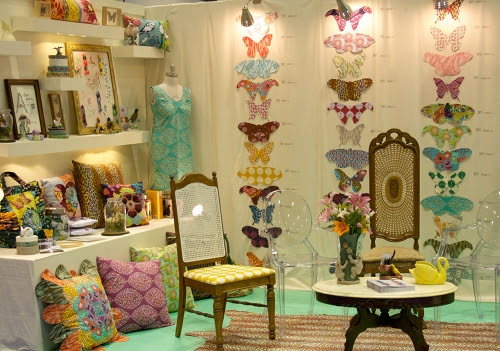 The pin wall of numbered "moth species" displaying each print in the collection was designed to suit the small strike off pieces. The pillows lining the needlework wall were a bonus that we didn't count on. 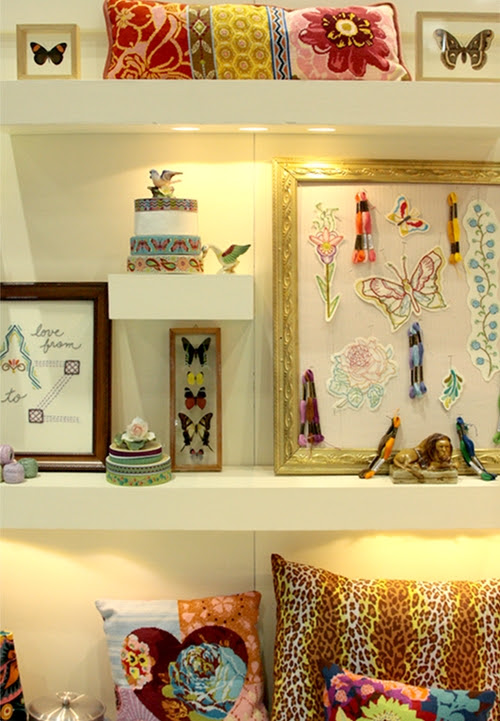 The little animal eccentricities, sculptures, vases, and stag antlers here and there were gathered on a whole day antiquing adventure with Isabela in Nolensville, Tn. We know how much I suffered through that task. 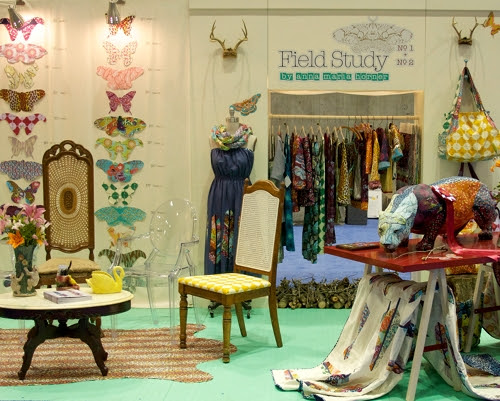 Without fabric I would have painted the leopard print floor cloth.  But with fabric, I was able to Steam-a-Seam the fabric to canvas and cut out the shape with a couple days to spare.  I snipped the threads of the final binding stitch on the quilts hanging under that table as we pulled up to the convention center. 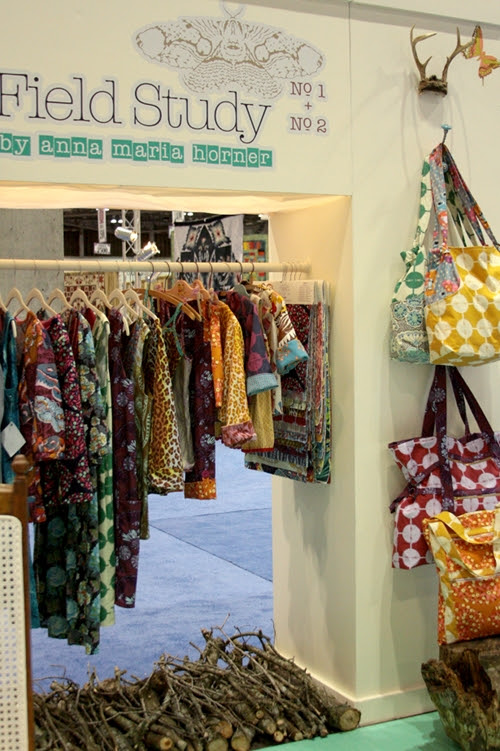 This space would have been occupied most likely by some sort of printed artwork reflecting the collection, but fortunately it was occupied by a healthy dose of Field Study sewn samples. 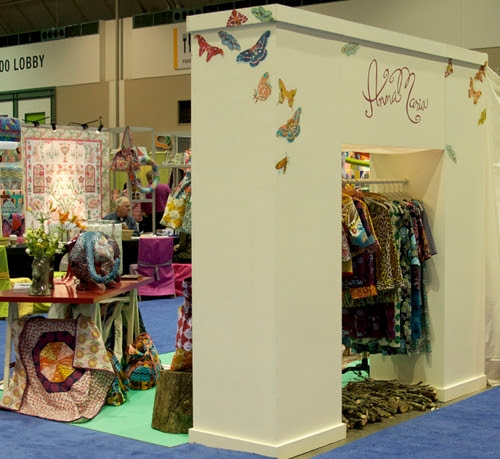 The cool thing about my spot on the floorplan this year was that no one was occupying the back side of half of my booth.  So I was able to consider and design the booth to be viewed from the back as well as from the front.  The moths decoupaged on the wall were cut from the fabric and not printed paper as originally planned for. 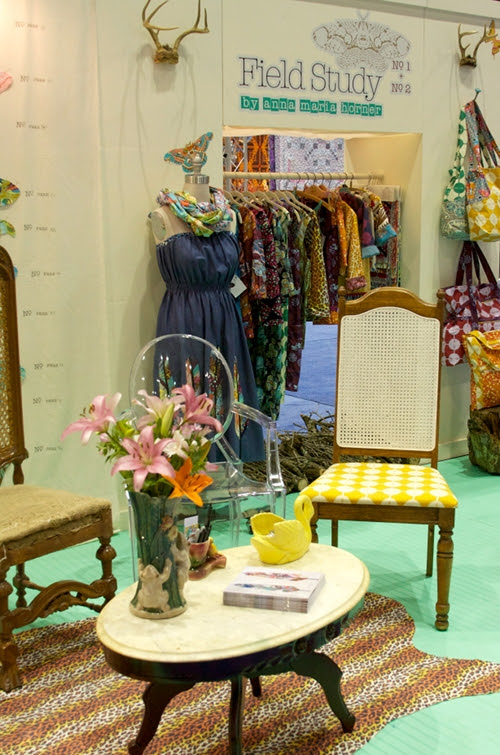 I love this process.  Putting it all together.  Everything from searching for a life size panther for two months to appropriating just the right furniture from my house to tell the story of my design work is an entertaining privilege.  The whole family was entirely entertained by me running around like a headless chicken, and no one ever seemed to doubt that it would all come together- despite me crying over it (just a little on a few hard days).  I was the only doubter.  A lot to be said and felt over just a trade show, I know.  But it has become an integral part of my creative process.  It's my big picture. Jeff called it my music video (which is funny coming from someone who karaoked Seal at a club while we were in KC).

So that's the big picture.  Up next, some little pictures and fussy details.
xoxoAM