Sprucing the Heck out of Friday 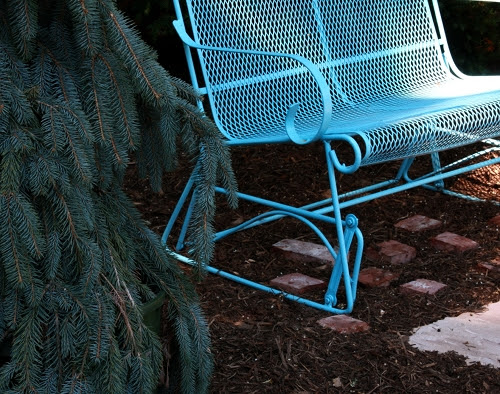 Ever since I started blah-blah-blahing about the mess I am making in the front yard, I have patiently worked little by little to transform roughly 1500 sq ft of former grassyland into mulchyland. Its been over a month now since I began the process of killing grass with plastic sheeting, pulling up said plastic (whilst holding my nose), cutting and layering cardboard over the dead sod, shoveling 10,000 lbs of topsoil (one shovel at a time) over that, and finally laying 15 cubic yards of mulch over that (that was me + a shovel too (I am 5lbs lighter and super strong now)).

That blue vintage iron bench would be my cherry on top. The bench is Demacopoulos family vintage, as in, I grew up with it on my back porch. Now its blue. And is inspiring lots of plant choices for the whole garden. A few things that I learned about this process is that you absolutley HAVE to avoid any slits or cracks in your cardboard or by golly those little crabgrass stinkers will creep right though. Though they are weakened though, and easy to pull, but I've gone back in and layered over various spots with more cardboard (take THAT, underground grass crime ring). And if you should run out of cardboard its really fun to go dumpster diving at your local recycling center. I'm not sure its legal. That's the fun part.

I'm sorry that so far I have not offered any real photos of the process. There were scenes of what looked like a cardboard quilt all soaking wet that were such a sight of girl-gone-green satisfaction that I was so close to changing completely out of my mudwoman gear to go and get my camera. But people. It has been some exhausting work. For someone who has been in the habit of running about 8-10 miles a week, I have skipped that all together for the past few weeks to save energy for the shovlin'. (How much more interesting can this post get, right?) Anyway, I knew that I would regret not having those mid progress photos. Sigh. I reserved today, my first full day alone in this house in what seems like a decade to buy a few "bones" ~ as in some small trees/shrubs to position here and there. I am barely scratching the surface of what I hope for all this mulchy happiness to be in a matter of a few years, but I am just really glad to be beginning the fun part. I bought a drooping Blue Spruce (above), two very boisterous Princess Lace Hydrangeas, and four very springy looking late blooming English Laurel bushes. Where's the rest of that garden piggy-bank? How did my whole garden budget get eaten alive by mulch, dirt, and a few prissy plants? Cuss. Anyway. This is to be a gradual process and I am saving most of the planting for late fall and next spring once the layers have marinated.

In what-I-do-for-a-living news: I've created a needleworks page that has info about all that stuff, plus a slide show, plus a fancy downloadable look book. I also have the two new patterns sneaking a peek on my sewing page, which are (FINALLY) at the printers. Sheesh. Summer.

In what-the-heck news: I have wasted the past year worrying that my dear daughter could get mugged, lost on the subway, or worse (not really) blow all my money at TopShop, when I should have been worrying about natural disasters like Earthquakes and Hurricanes. In fact almost exactly this time last year I sent her out of the tornado ally of Tennessee to Brooklyn where she was just down the road from a tornado. Now this all could mean one of two things: either I need to get better and more specific about my worrying; or it doesn't pay to worry. Not sure yet. I will report back when I'm 108 years old.

Have a good weekend pals, Anna