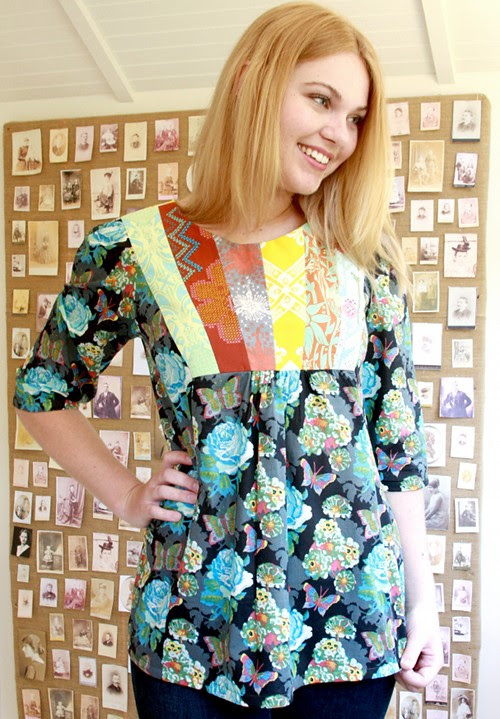 Thank you so much for all the kind birthday wishes, and also for the bit of commiserating regarding age and the disbelief of such. But I gotta say, looking back over so much in my life, its a wonder I'm not 79. My age shock doesn't lie in wishing it were different, its just that I am amazed how life goes by, its so surreal and almost intangible.... no other words. I wouldn't trade places with any twenty year old, though, that I can say for sure. But speaking of, I am so glad you enjoyed my chat with Anna. She was blushing through the whole thing, it was kind of fun to torture the intern (that's the whole point right?).

Well I've corralled Crista, my other intern, to answer some of the same and some different questions. This is sweet Crista above wearing my new almost printed pattern, the Painted Portrait Blouse & Dress- wuuhhhl obviously she's just wearing the blouse version not the dress too. I like explaining obvious things like that, because it gives me typing practice. The quick brown fox jumps over the lazy dog. Anyway, the moment I said hullo to her for the first time, I asked her to model this blouse in the same breath. We had been on the hunt for a fair girl for the next pattern cover, and we had no idea that she would just walk right in. But she did. And I am glad for many reasons.

That was fun. I'll show up again here sometime next week, once I get just a bit more caught up. I've been wanting to share some stories behind the talented designers in my Visiting Artist's pool, spill my official Janome news, introduce you formally to my new sewing patterns, show some other needleworks projects on the horizon and just get back to plain old life snippets here. Sound good?