Blueberry Saturday (and peach and lemon) 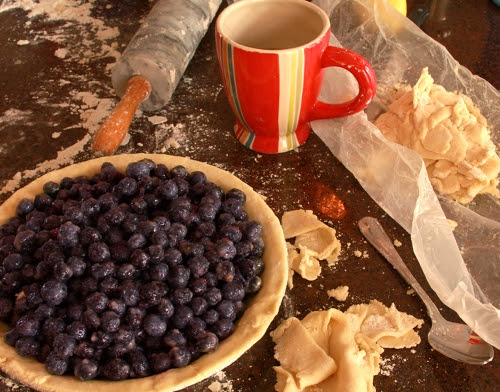 5 PIES is my contribution to our upcoming long weekend at my parents' house. I was planning only 4- two blueberry and two peach- but I had all this leftover crust that could not be wasted (never), so I got out my good ole Betty Crocker classic cookbook and looked for something that I had the ingredients for- erhh something that between myself and my neighbor, Karen, had the ingredients for (thanks Karen- even trade I think, we just gave your Josh two of our Wii remotes). Anyhoo, I have some words about baking. I am not big on baking. Maybe because I am not big on sweets or cakes too much. Except for pie. I lurve making pie. I make such a gianormous mess that the finished pie ends up being the apology to my husband for making such a mess of his kitchen (It is his kitchen- he cleans it, I cook in it. He can have it. I will happily keep cooking.) In general I like to cook a lot. Free style with of course our favorite, simple, memorized standards thrown in. Baking requires getting measurements just so, and chemical reactions that I don't have the desire or patience to understand and that's not so much my thing. Yet I find (and this is why I like it) that I can pretty much just throw a pie together (easy as..... that's right, pie). Jeff's eyebrows formed a bracket parentheses over his morning coffee cup today when he watched me pour sugar straight from the bag under my right arm into a giant bowl of blueberries as I stirred with my left and balanced my mom on the phone on my shoulder chatting away about other food we're planning. I'm not bragging, (nkay, maybe a little) its just that for me to like any kind of cooking/baking/preparing it has to be able to be done pretty much like the above described scene and still taste great. I have over the years (ugggh that makes me sound so old) figured out how to make a few kinds of pie taste great, so I thought I would share some of my little maybe-not-secrets, but special to me ways of making a couple.

Chop the butter into about a dozen pieces in glass bowl. Pour the flour over it, and keep chopping through the butter, which will start to blend the flour. Once butter pieces are about the size of grapes, move to using one of those dough blender things with the wires until the floured butter balls are about the size of peas. Then sprinkle in the tbsps of water/OJ over everything as you toss the dough with a fork to mix- don't try to stir. Once the dough is about like crumbly sugar cookie dough, dump it (even if it feels too crumby) onto a generously sized sheet of wax paper. Fold opposite ends of the wax paper up over the dough and press into the dough using the wax paper to press from opposing directions instead of your bare hands. Do the same from the other two directions. Continue to knead the dough in this manner, pressing it into a firm shape with the wax paper, (it shouldn't take more than about 7 or 8 good presses) then wrap it up in the wax paper and stick in the fridge for at least 30 min before you use it. When you're ready to use it, let it stand at room temperature for about 5 or 10 minutes before dividing and rolling out.

Blueberry Filling:
The amount of blueberries I use depends on the size of the pan obviously, but I like a heaping amount, so I usually have more than I need- maybe 4 cups or so. I do just pour sugar in until it looks about right- if I had to guess I would say about 1 or 1-1/2 cups. I also drizzle in about 1/2 tsp vanilla extract, 1/2 tsp finely grated lemon peel, and about a tbsp of flour.
~or~
Peach Filling:
Same as above on amounts of fruit, sugar, and flour, but I also use about a tsp of cinnamon and sprinkle about 1/2 tsp almond extract

My American grandmother always made so many pies for us ravenous grandchildren. Tons. Some visits she would make up to 8 pies or so. I guess I'm getting there myself. With today's leftover crust I decided to try a Lemon Meringue pie. I know. You have to be pretty precise about the glossiness and peekiness of your meringue peeks and all but I actually really enjoyed making it. I'll get back to you if its good, it sure looks all fluffy, toasty and delicious. The house was so quiet while Jeff went to retrieve four kids from a week-long camp, Roman napped and Eleni cuddled with a quilt in front of some cartoons. For once I wasn't sewing or stitching during that peaceful time. But was covered in flour, apron over my nightgown, jumpy on coffee, nibbling on leftover bacon, and teaching myself how to make a new kind of pie using my own and borrowed ingredients.

I felt so happy, if not just slightly American.
Happy Independence Day!
xo,AM
Posted by Unknown at 1:16 PM