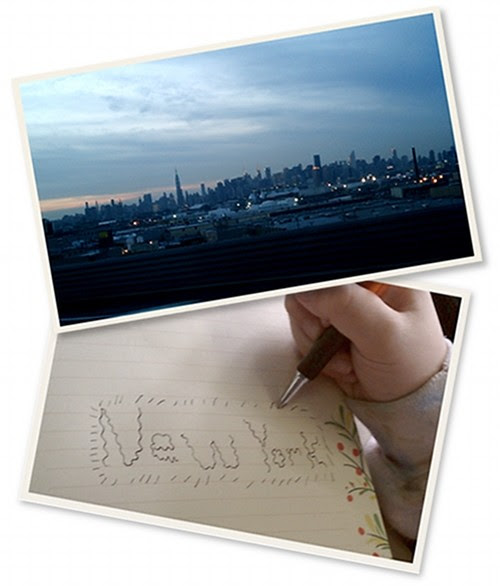 Our Spring Break, while it might seem unfair, was entirely engineered to keep Roman at home and not traveling to and fro riding all means of mass transit. Jeff took Nicolas and Joseph to the city one Sunday and spent three days with them, doing slightly more boyish things, hanging with Juliana and he also coded some work meetings in. I stayed at home with the little girls and Roman, then once the big boys returned we headed out leaving Roman to have guy time for the rest of the week. I really, really don't think Roman minded not being forced into one seat or another for a week straight, which is sort of what vacation in a large city becomes for a wittle kid wike him. As we drove into the city on St. Patrick's Day, evening had just begun to fall, the Empire State building was lit with green lights, and Eleni was journaling the beginnings of our trip. 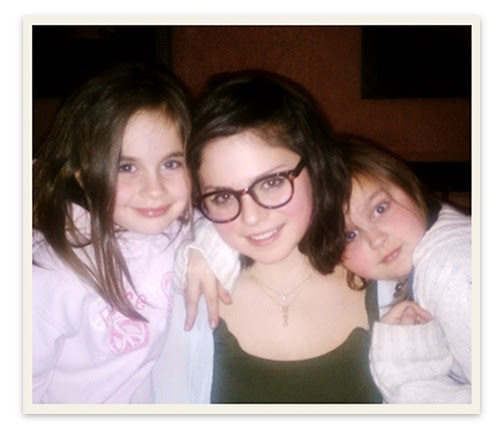 After about 0.2 seconds of thought, the first night we decided not to fight the pub crowds in search of fish, chips and green beer, but instead we visited our favorite restaurant in Little Italy. Il Pallazzo won our hearts a few years ago, with such amazing food, attentive wait staff, and they also refer to Juliana and I (and I'm certain every other female on the planet) as "bella" whether they're saying you're welcome after you've sung a thank you to them, or asking you to sample the wine while they wait to finish a full pour (try the Acacia Pinot Noir), or saying goodnight. Bella is at the end of every phrase. Its cozy. Call me beauty in any language and I will pay you for food over and over again. So easily won by flattery, its ridiculous. Of course it also helps when every bite of everything on their menu melts in your mouth. 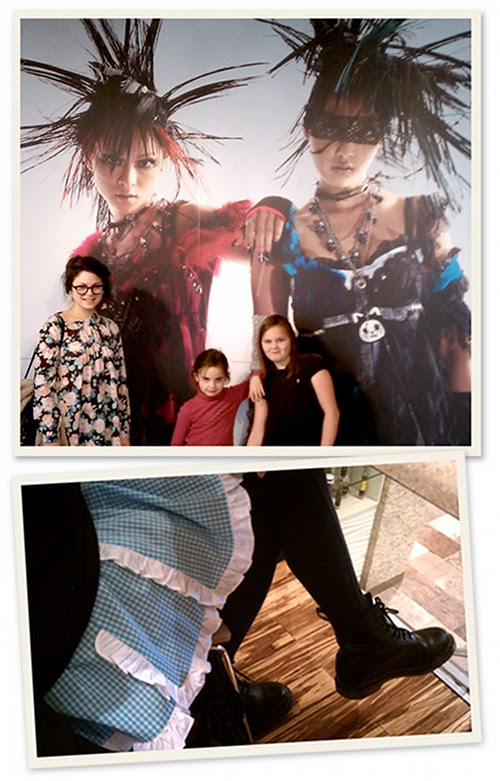 The first full day, I snuck out of bed early to train out to NJ for a meeting while the girls, my mama, and my MIL slumbered in a little longer then had a day with Juliana to see the Pratt campus, have lunch and generally hop about Brooklyn. After meeting up with them at Penn Station we wandered around Chelsea, came upon FIT, and found our way into a free exhibit featuring Japanese fashion, Vivienne Westwood, and the His and Hers show. So, so cool. If you live nearby, you should go by and see it. Its not too big, but so entertaining, quite fascinating. Speaking of fashion, Juliana sported this adorable skirt that she made for one of her classes. She got an A. Good girl. 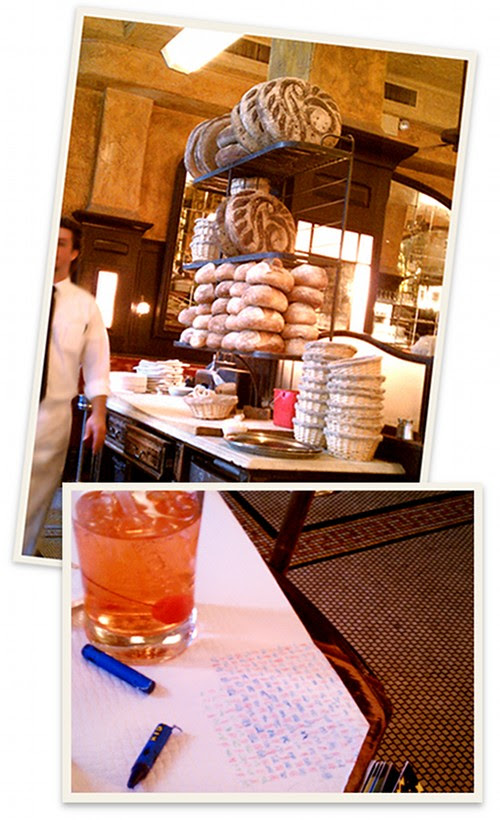 After a second meeting that I had in Chelsea (I know, I'm a worker bee), and a little trip to Purlsoho, we floated into Balthazar for an early dinner. My favorite French place in Soho. I go every chance I get. I feel like I'm getting boring going to the same places every time, but man, if someone put a poached egg on your salad, sliced crusty bread for you, served it with fresh butter, then gave you french fries that reminded you of your Yiayia's homemade potatoes fried in olive oil...wuhhhll....you'd keep going, right? Oui. Plus it gave Eleni and Isabela yet another chance to color on tables and have cherry Sprites. 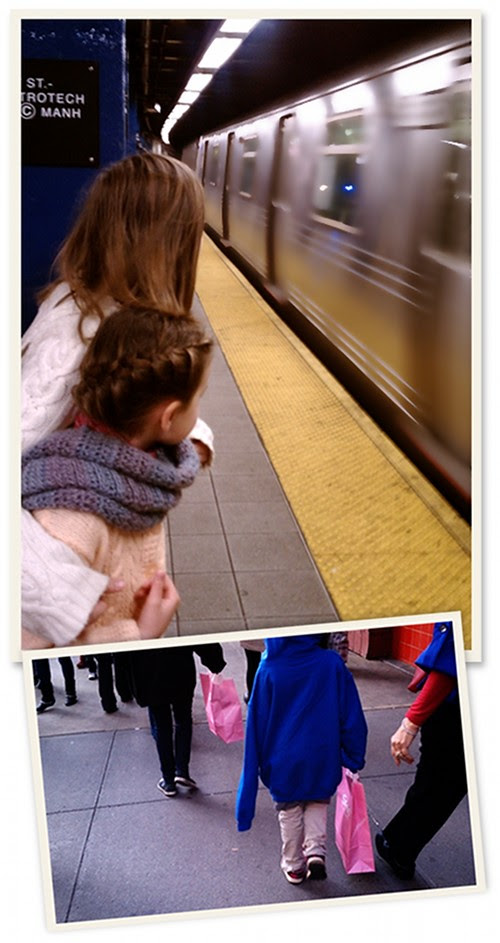 The next day may well be ever referred to as our big day. Big, because we had 6 tickets in my bag for Mary Poppins on Broadway (which I thankfully didn't leave on the floor of a cab or anything stupid like that). And since it was a single route shot from where we were staying in Brooklyn over and up to 42nd St. we thought it might be very big and city like of us if we took the subway. I've only been on the subway a few times, never wanting to miss the views of the city from just riding around in the back of a cab. I've been on the trains tons, for longer stretches out to Long Island to see my brother, George which I also find mysteriously enjoyable as well. The subway is just so...ehmmm... economical and cool. Seen through the eyes of these two little girls who jumped back when the rush came around the corner and giggled as their hair blew about, it also became altogether exhilarating. I know those of you who do this every day are giggling to yourself right now, too.

As girl-in-a-perfect-world-fate would have it, the Hello Kitty store meows directly across the street from the New Amsterdam Theatre, so we had before and after the show fun there (see pink Sanrio shoppers). It was quite chilly and very windy on Saturday so we succumbed to seriously touristy, IheartNYC-hoodie shopping to deal with that. Adoring Eleni being swallowed by hers. The play was so incredibly fun. I think I might have cried with giddy happiness when they sang/danced Step in Time just because live performances of any genre, when they are totally and completely good, are just so moving. It is such pure entertainment that I wonder how I manage to be entertained otherwise. The girls, all of us, really, were just so happy and in love with it, even if money did buy it this time. 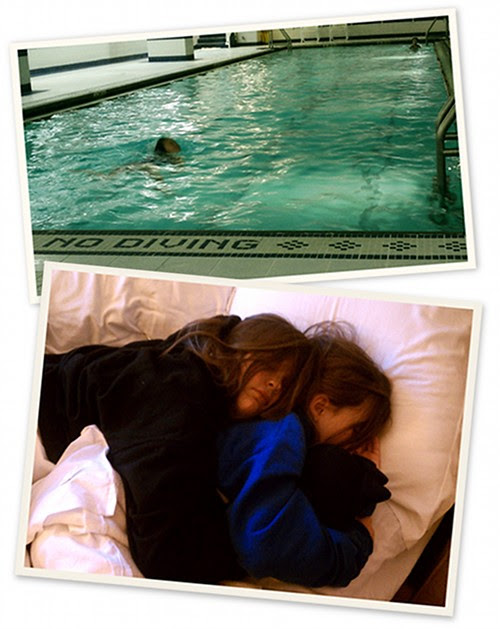 That was a big day. We finished it off with a lovely meal of fish, rice, vegetables, and all manner of desserts at a Spanish/Italian place, Meson Sevilla, on W. 46th. Despite aching legs, full bellies, and show tunes wearily playing and replaying through our heads, the girls talked me into letting them stay at the hotel pool until it closed at 10pm. I had some embroidery with me and the pool had lounge chairs so that worked. We stayed at the Marriott Brooklyn Bridge, which as you might guess is just on the Brooklyn side of the bridge and a comfortable place sort of out of the noisy-ness that I am accustom to in Manhattan. But its really so easy to hop over the bridge and do whatevs. Renting a suite with 2 double beds, a fold out bed and adding a rollaway bed was the best idea I had for this trip. So much better than staying into two rooms at just about the same price. Every last one of us had some handiwork with us, so it was a cozy pleasure to sink into couches and stitch away the end of each day. And while the girls were all excited about having their own beds on opposite sides of the room, this is how I found them the last morning. They are my messy little munchkin pies. 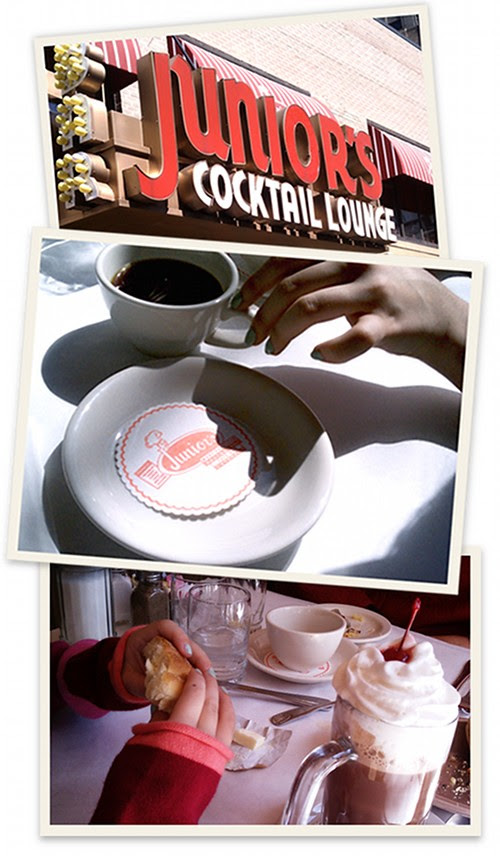 And the final imprint of our trip was a fabulous midday breakfast at Juniors in Brooklyn on Sunday. They had me at Cheese Blintzes. And coffee, and hot chocolate, and french toast and buttery, salty biscuits. Da best.

And that my friends is what you can do in NYC without a Canon 40D.
Not so bad.
xoxo, AM
Posted by Unknown at 12:55 PM