On Boys and Danger 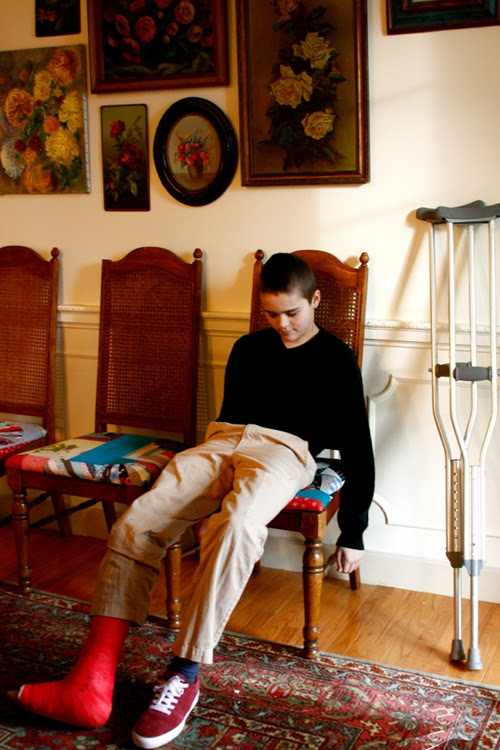 Eeech. Jeff just emailed me a picture of a scaly, little, skinny ankle, with a surgery scar, some inkpen marks (from surgery I guess) and what looks the bulge of screw heads near the surface. The subject line was "Nicolas wants you to see this". Of course he does. He loves flaunting anything scary or disgusting in my face. They are at the orthopedist right now getting the cast off in favor of I'm not sure what- waiting to see if it'll be a splint or another cast. I feel like I'm gonna lose my Luna bar. But I don't think its because I'm grossed out. I think its because I'm scared that he's actually healing. I want him to heal. I want him to heal. You know what he'll want to do after he's healed right? Right. Eeechblechdahblunchech. 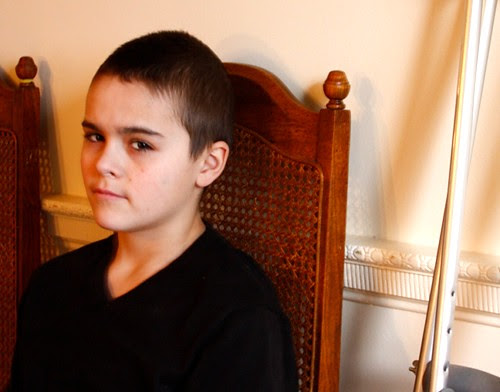 I took these pictures just a few days after he got the cast. Mopey boy. As sad as its been, there has been safety in that little leg cage, at least for me. I have had so much sympathy for this kid. He's practically had to swat me away a few times when I've tried to help him too much. He has handled being off his feet and not skating so much better than I would have guessed. Watching him struggle to get used to the cast was hard. We've had lots of conversations about risk taking. My dad contributes to that conversation like this: "He has to stop that skateboarding business!" I know where he's coming from. Its a conflict. Nicolas does not dig team sports. Nicolas is strong, creative and very, very coordinated, despite what these portraits evidence. And the thing is, is that he has an unbelievably high tolerance for pain. I love and hate that. Nicolas loves to skate. Watching him not skate is not fun. But here's the thing that I think is unique to this type of sport and wears on my weary heart: it is a practice of learning to do dangerous things. And as good as you can get doing dangerous things (and he has) they are still dangerous things. What's worse, the better you get the more dangerous things you try. And then your mother falls over from exhaustion. 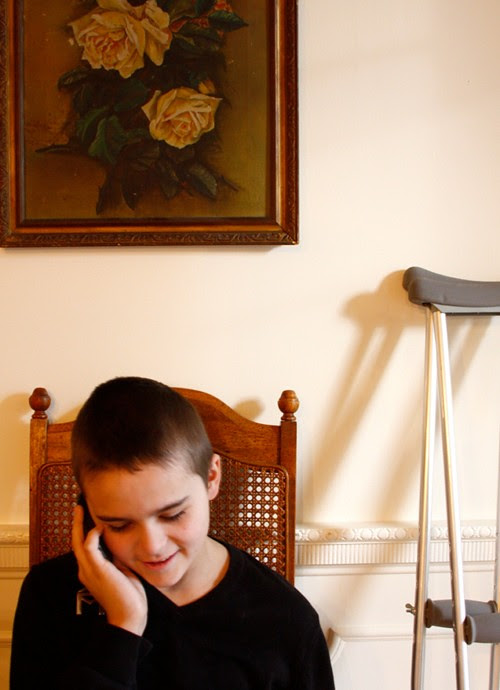 And then call your friends to tell them about your wicked injuries and pretend that you don't really enjoy the attention.

And while you're off your feet, you get better at making skate videos of your friends at your favorite local skate park.

And then your mom blogs about it because she is so proud of you, even if most of your bravery is exemplified by scaring the living daylights out of her on a hourly basis.

The other thing. About boys. And girls. And danger. We've had four broken bones in this family. Only one of those was earned by actually doing something. Nicolas was trying to get better at something that he loves. The other kids were, uhhh, playing *butt blaster, jumping off a bed, and swinging from a tree. And while you can be skeptical about a future in professional skateboarding, I don't know any professional butt-blasters, bed-jumpers, or tree swingers.

Skate on, Nicolas.
I just wrote myself into a tear. Sniff.
And a laugh. Ha.
xo, Mom

*Butt blaster is when one person lays on their back, feet in the air forming a seat that the second person sits in. When the person laying down bends their knees all the way back then shoots the other across the room with a forward thrust of their feet, a butt has effectively been blasted.
*It is not recommended.
*It is incredibly fun.
Posted by Unknown at 9:53 AM