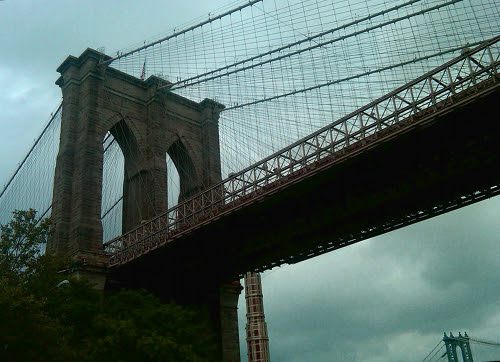 I'm not sure what I was expecting. Taking her to school. I should have guessed what would have drummed up inside me ready to spill everywhere, leaving a trail of years and memories between here and Brooklyn. But I didn't see it coming, not all of it. I am very used to living in the present, but was shot out of a canon to the past. So many times over this past summer. Just shot towards her birth and the beginnings of all of us, the beginnings of Jeff and me. But being hurled past it in a rush of memories it is so hard to see it all the way you saw it then. You think it will last forever, and some days even wish away the difficult parts. Humans just don't know the blur it will become. I believe this to be by design. Inherent in our making. We couldn't handle the frailty of ourselves walking around, if we knew how fast.

Getting her settled, saying our goodbyes, it was bitter and sweet and beautiful and sad and perfect. We walked slowly back to our hotel with the sky threatening rain, my eyes threatening worse. We took a detour through Fort Greene to sit and take the walk as slow as possible. And it happened. The sky sobbed. I rained. And we were stuck, under the shelter of the visitor's center. We are after all, only visitors. We waited for it to stop. Waited. Waited. Didn't bother to verbalize much of what we were already feeling in perfect synchronicity. Fearing we would miss our flight, after waiting as long as we could there, and with no change in the weather, we decided to drown down the hill in a rush of water and emotion, getting utterly soaked.

At the hotel we made a quick grab of our suitcases, while the taxi waited, and headed to La Guardia. Not much conversation, but an unusually talkative cabbie who asked us all about our family, was shocked we had a daughter old enough to be in college, further shocked that we had 5 waiting at home, and I wasn't in the mood for any of it. "I like you two", he kept saying. "Children are God's greatest blessing" he said. And I. Was not in the mood for conversation. I was definitely not in the mood to hear that all the crying the sky had done delayed our flight by an hour. Two hours. Four hours, so now we'll miss our connecting and be stuck in Baltimore. Cancelled. So now here we are. Rush back to her? See if she wants to skip orientation and hang out one more night with her parents? No. Stuck. Floating in a sea of rain and utter sadness. It was calling to mind something, a memory, I couldn't place what.

Then the waiting. We couldn't get out of New York for another whole day later. I needed the intoxicating hugs of the rest of my brood. I wanted to cry into Roman's bewildered but willing little neck. We poured into a nearby hotel. The room was freezing and the only thing that I could do was crawl into the bed. I didn't move for hours. Didn't even shift. Just Jeff and I there. Waiting for the hours to go by. Jeff went to get us food. Went to get us water. I slightly laughed at a movie or two, but mostly just laid there, out of body. Looking around inside my new self at how it looked and couldn't see much that made me happy without her. I dozed off around 1am. Woke up around 3am. And was arrested again by the familiarity of this set of circumstances. Trying to get somewhere, but getting stuck twice, once in the rain, once at the airport, then the all night waiting. Jeff. Me. And searching. Looking for her precious smile in my mind.

We were 19. Unmarried, and unexpectedly expecting. Expecting Juliana. We had chosen adoptive parents. It seemed like a good idea at my age and we could continue the paths we had begun. She could continue with an eager family who was prepared for her. Had been praying for her.

We went to the hospital in labor, lawyers, parents, everyone, waiting in the wings. My labor stopped after I got there. We got stuck. Then sent away. We went again, a second time, to the hospital in full labor, which after an hour of convincing everyone around me that it was the real thing, decided to stop in its tracks. On the way home, I realized it wasn't a mistake. It was her, begging to be mine. My body would not give her up, even if my mind already had. I called off the adoption. Then the third time in labor, we decided to wait it out at home. Jeff. Me. And searching. Looking for her precious smile in my mind. For a whole day. And then, the third time, she was ours.

So there it was, in the middle of the night (a Sunday night after 3 am, quite near how she was born) at a hotel in Astoria, New York, raining, I was granted the memory to answer the nagging something that I was recalling. We brought her, again into a world. This time she is her own.

This past June just she and I went to Brooklyn to get a feel for it, and just enjoy some time together for four days. Really, the trip of a lifetime. We did nothing special, we didn't have to. On the last night, we took in a French film in a small theater in Soho. Leaving Manhattan into the wee hours of the morning, those cabbies fly. It is funny, how fast, and like a roller coaster. As we approached the Brooklyn Bridge, I thought, there it is: the bridge between where she is now and where she will be at the end of the summer. The summer: the bridge that will give us our last childhood days with her. We were so tired, barely spoke, but both obviously enjoyed the coolness that had cloaked the city after a hot day, windows down, our hair whipping everywhere. Then as we encountered the stretch across the water, I was flooded with memories of her as a baby, a toddler, her bubbly face, her beginnings, the she that almost wasn't mine, and I fought back tears. I couldn't believe we were about to reach her soon-to-be-home, just on the other side of the bridge. Rushing through the lights and under and over the architecture , I was looking back in time deep inside of me. Then I heard her say it, and I couldn't believe it. She said, like a little child, filled with excitement, "Mom, look back!"

I am! I thought, screamed, inside my head, in wonderment at the moment. How did she know?

I looked away from my side window where I was hiding some tears, that thankfully were quickly being licked up by the wind, to see her looking through the back of the taxi at the lights of Manhattan. They flickered through the thousands of suspension cables in the most mesmerizing way, like a dance. Like a filmstrip of life gone by. She was suspended there on the bridge. The thought of it is suspended forever in my mind.

And I am, more than I am anything, grateful.

To quote a cabbie, "Children are God's greatest blessing"

xoxoAnnaMaria
Posted by Unknown at 8:21 PM