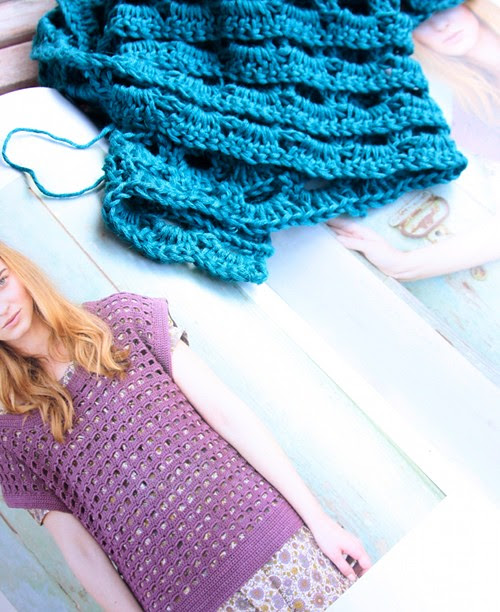 Does that make me a bad mother? Its just that I got this book, and I got this yarn, and I can't put either of them down for anything lately. Just look how pretty that sweater is! I could really get used to this following-a-crochet-pattern-business, now that I found one that I actually like! Maybe I don't look hard enough, but I rarely find a book of patterns for crochet that I love- it's always shawls and granny squares (which I love, but don't want to wear), and not basic enough- there is so much more out there for knitting, and somehow that still hasn't gotten me knitting. This is why I normally make things up as I go along, and almost never make fitted items, because I am too impatient to sit down a make a plan before I begin. (Insert your crochet book recommendations here.) 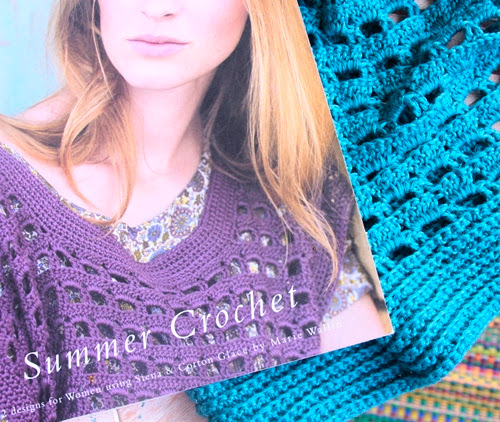 I am making the Sardinia sweater which just happens to be on the cover. This brochure is filled with gorgeous patterns, I would wear every one of them. Seriously. I could be slightly swayed due to most of the pattern titles being named after Greek Isles. ('Cept I think one is called Sicily. Close enough.) But they are all just so wearable looking which is key. I have to keep double checking myself as I go because the book is written with all the UK denotations, so I have to translate dc to sc, etc., since we Yanks insist on having a different name for everything compared the European stitch names (units of measure, size charts, on and on), but once the pattern gets going, its very simple.

About the yarn, Rowan's Lenpur Linen, which is a viscose/linen blend: the weight is such a dream- it moves like water after just a little cloth is crocheted/knitted up. Not too heavy, not fuzzy, not stiff, its perfect. I had a hard time choosing a color, because any of them would be beautiful, but I already have enough gray/purple sweaters so I went with Lagoon. (If you're still reading you might want to skip down to the bullet point version of this post.) I think the book recommends using the Cotton Glace for most of the sweaters, so I had to have Amanda at Textile help me convert the thickness factor (?), etc. (I really don't know what I'm talking about- she does- I just want to do the crocheting part- I figure if I keep letting other people figure these things out for me that I'll eventually learn what they're doing. That's a lie. I don't care. I just want to crochet.) This essentially meant I went down a size from what I was planning to make, and still I think it might fit slightly larger than shown. Which will still be pretty. Really super pretty.