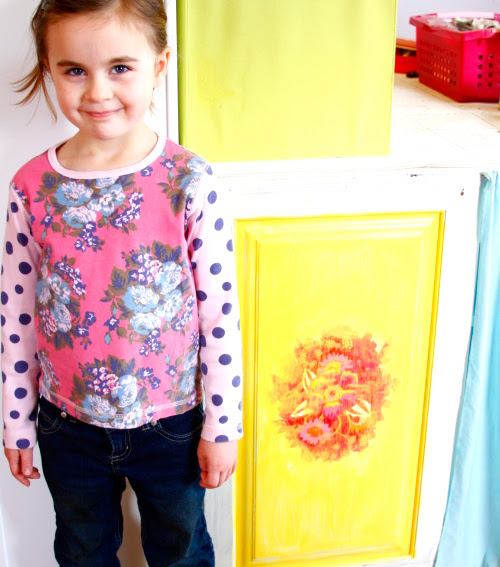 (Entirely too coordinated today, Eleni requested a portrait by the cutting table upon completing her dressing.)

Thank you, thank you a million times thank you! You guys are so smart and veggie-lovin, I knew all I had to do was ask. And I should have mentioned that I have skimmed through my friend's copy of Deceptively Delicious, which I think is a great concept, not a new concept (who among us doesn't sneak in a smidge of strained spinach with every spoonful of strained sweet potoates that baby will tolerate?), but really a great concept for a cute book. The reason I haven't purchased it, is because so many of the recipes are for dishes I couldn't get Joseph to eat whether or not they're made with a sneak of veggies. In addition to being adverse to vegetables, he is just sooooo picky. No grapes, oranges, berries of any sort, watermelon, sauces (unless on pizza), meatloaf, raviolis, soups (except broth from chick-noodle) etc. etc. Clearly his don't list is too long to continue, but the other thing I find is that the easier it is to hide a vegetable the less nutritional value it seems to have. Its the greens we seem to have the most trouble finding a way to fit in. But after 17+ years parenting, I've learned to not turn mealtime into a warzone. I refuse to. Not to mention, it has never helped one of my kids like something new. I think its perfectly fine for him to have dislikes, I just want help his tastebuds mature a bit. 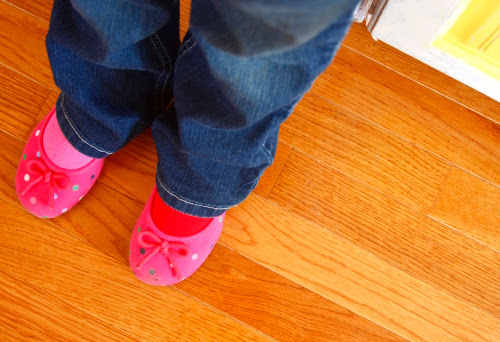 (So as not to completely disappoint her fans, she has chosen to just barely mismatch those socks. Artistic genius, I say. But, well, could be bias.)

But your enthusiasm, and great ideas, have given me new inspiration and hope! Jeff and I have been meaning to get a garden started, which we hope to embark on this summer (would love some chickens too, but no one has trouble stomaching eggs, so that can wait.) We've also read article after article about how much it helps to not only grow food with your kids, but to also include them in the preparation of meals. I can mostly definitely vouch for that one. Though this could get dicey when covert carrot operations are underway at the stove while their backs are turned. But we'll figure that out.

I have tried the V-8 fusion and already had that in the fridge, and I'm not kidding, when I tell you that last night as Joseph was enjoying a glass of it, he overheard Nicolas read aloud from the bottle that "every glass has a full serving of vegetables and fruits! - Wow, thats great!"

To which Joseph replied, "What? Oh. I don't really like this." And has refused to drink it this morning. Anticipating this, I bought JuicyJuice at the market last night, and when everyone cleared the kitchen, I mixed in about 25% purple carrot juice and hid the evidence. Wink Juice. He rather enjoyed it this morning with his breakfast.

And tonight for dinner, I will peel a zucchini (God as my witness) and shred it into the mozzarella that will top his favorite homemade pizza. Nudge-Nudge Pizza. I have a notion to also sneak some flecs of spinach in the sauce.....but I better do this gracefully and gradually.

Other items on the to-try list will be some pumpkin pancakes, zucchini bread, and carrots in the mac & cheese. I know there's more, but that's on the mind at present.

I'll report back. Thanks to all my field correspondents!
xoxo, Anna
Posted by Unknown at 12:11 PM