And Rain on Friday 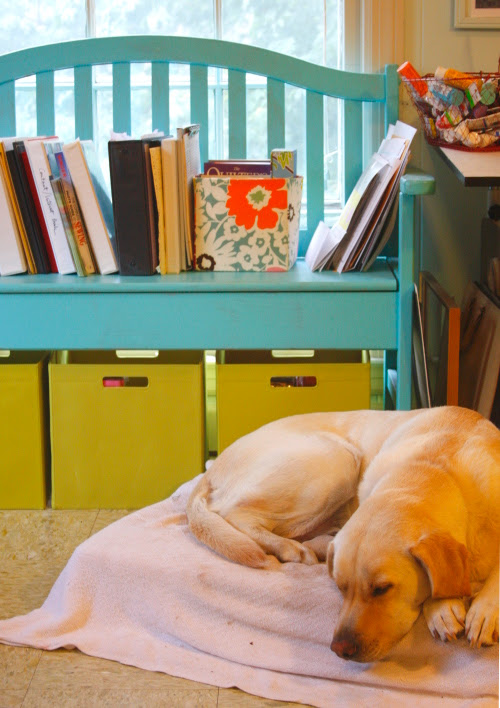 How did he know that's what I wanted to do today too? Such a smart dog. I guess rain has the same effect on King Leo the VI. Though I'm fairly certain that sun, partly cloudy, partly sunny, snow and hail all have this effect on him too.

Thanks for all the nice color comments on my last post. I don't mean to imply that I ignore color theory. I adore color theory and play with abandon. The colorwheel spins in my brain subconsciously as I compose. I very often go with an obvious pairing, but add a variation for interest, or intentionally choose something "wrong" to add some depth. I also don't subscribe to calling the typical harmonious pairings rules so much as I think of them as scientific suggestions of what happens when combining. I'm also convinced that everyone's eyes actually see color slightly differently. No research to point to other than my sister and I spending about 20 minutes in a fabric store discussing (arguing) the properties of a certain purple-ish fabric that she felt was more blue/cobalt and I felt was periwinkle/lilac. We finally shut up when I suggested our eyes were wired differently (even though it was periwinkle).

A few of you asked for the color in the living room which is actually a Porter color called Green Wave. Green? It did look pretty green right up until I painted on the wall. I was searching for something aqua-ish...but non-intrusive...like if a color could actually act like a neutral, that's what I was looking for. Our wood floors have such a warm orangey/honey hue that the walls look blue because of the compliment contrast with floor. Had the floors been red.....the walls would look more green. See? I embrace color theory. We're bff's. 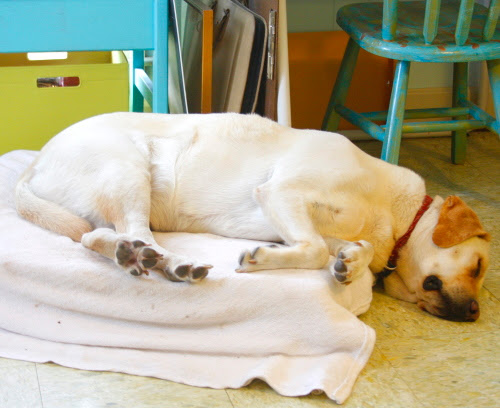 Okay, okay, I get it. Apparently color chat puts him into a deep sleep.

wishing you a restful weekend. xoxox,Anna
Posted by Unknown at 11:29 AM