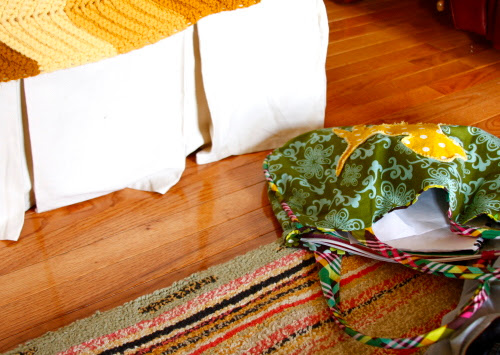 It was sunny in the living room yesterday afternoon and I was making progress working on some book photography, hoping to accomplish just one more good one before the kids got home. Right on schedule at 3:34 I heard the scuffle for the doorknob and the usual chatter of young voices and the bus breaks releasing and accelerating down the road after dropping off my middle three. But. There were not three. The boys busted through the door just as I got to it and asked me where Isabela was? Where Isabela is!? Why are you asking ME!? Wasn't she on the bus??!!!! They didn't know. Neither of them knew. How could they not have known. Didn't matter. Got both phones out, dialed one to my neighbor, the other to school. Karen picks up. No answer at school. Karen asks her little Josh if he saw Isabela on the bus. Yes. He saw her asleep on the bus. Asleep! Gasp. I slowly transitioned from the stomach-dropping thought of wondering where on earth she was (though my hands were still shaking along with my voice) to the slightly less painful stomach-dropping thought of how scared she will be when she wakes up and realizes that she's missed her stop. I decided to save the sister's-keeper lecture for the boys for later. Then I put in another call to the school bus authority, immediately being put on hold, the other phone trying the school again.....both calls trying to find a way to reach the bus driver (who was a substitute!)....also grilling the boys about who stays on the bus after them, and scanning the school directory for some of those phone numbers....thinking perhaps I could beckon other parents to run out to the bus to tell the driver he has a sleeping girl on there. While I was doing those seven things, I was also hovering on the ridiculous thoughts of what if he doesn't realize she's back there.....
But then I stopped. I stopped when I heard an exasperated little girl bust through the door with tears all over her face and nothing coming out of her mouth but 'mommy. mommy. mommy.' 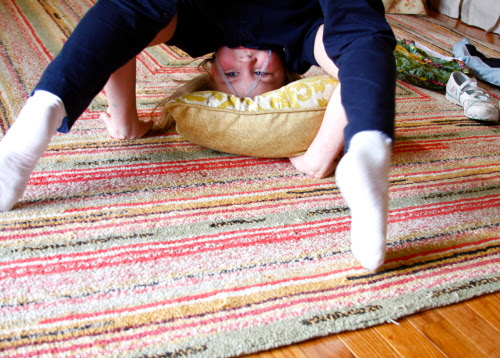 Oh what a warm long tearful hug that was. The tragedy in her little face was just so bitter and scared. We had the longest tightest hug on the big chair while I continued to assure her with pats and rubs and squeezes and warm silence and rocking. Such a big girl spilling off my lap but still so tiny in her heart. The world is still so huge. The other side of the neighborhood on the bus without her brothers must have felt like the edge of the earth. 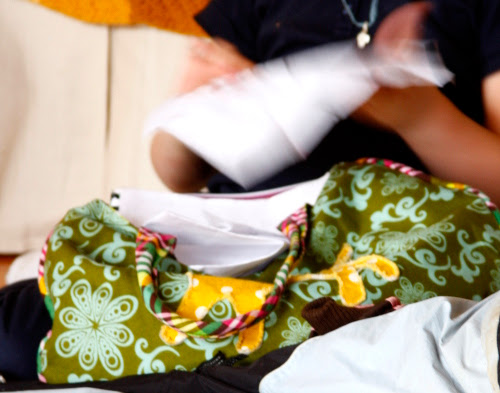 I thought about telling her she should try to stay awake on the bus. I thought about suggesting an earlier bed time. I thought about telling her how her brothers' will be told to take better care of her. None of those thoughts quite seemed to match her needs during these moments. So I just let her know that we would find her anywhere. That the feeling she had of wanting to be home was the same as my feeling of wanting her home. And that nothing will ever take her away from me. Not even a nap. Small smile. And that I'm really glad she woke up because I didn't think she would fit in the lost and found box at school. Finally a giggle. That giggle is life. 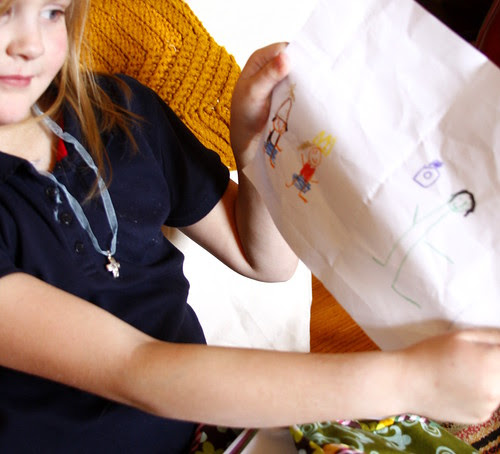 Just on the other side of that giggle she resiliently hopped up and said "Hey ya wanna see my PE homework? It's a tripod! You have a tripod and I know how to be a tripod now too!" And then I knew that we were finally brought to what must have been the moments she was anticipating while she drifted into slumber on the bus. She must have been excited to come home and show me this. Then she pulled out all her crumbled, folded, curled and imperfect papers from her day, sharing everyone with joyful back to usual words, that slowly erased the residual little crying heaves and returned us both to our sweet afternoon. 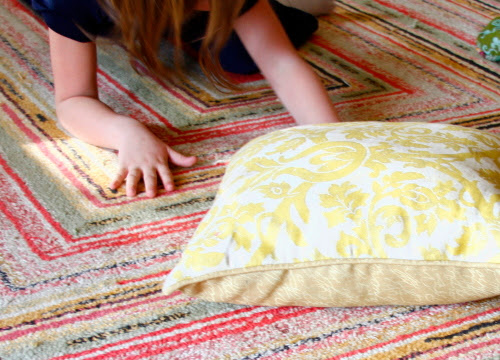 And then it was back to the tripods. One after another her little tomato face about to burst. Falling down. Getting back up. Tumbling over. Trying again. But every time a soft place to land. And I knew that I had succeeded. I was her soft place and my hands stopped shaking.