So I've been coming across lots of odds and ends in the studio as I gradually reorganize and liberate my work space from ignoredom. Some of those ends have gotten more odd as they are subjected to this house of many little curious hands. 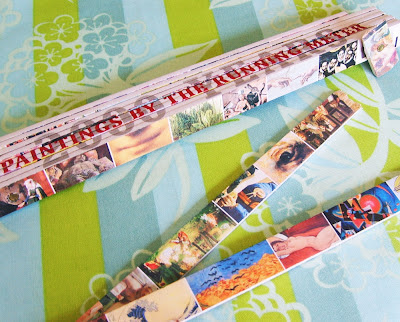 My mom has not a small obsession with gift shopping at the MoMA. Totally fine by me! I've been showered with delightful little art-y things over the years including this smart art history lesson of a folding meter stick. The glory of which should not be in two pieces as shown above. Alas, it be ever still. Perpetrator yet to be pinned with certainty. 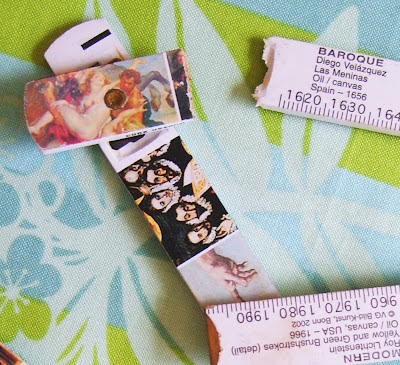 I've tried to fix it. No luck. But a funnier luck, guess during which period of art it broke? Yup. I don't make this stuff up people. It b-roke in the Baroque period. Luckier still for the assumed perpetrator as I was so completely amused by the perfection of coincidence that I forgot to finish my interrogation and punishment. It's fine I suppose the way it is. The kids are now familiar with the Baroque period of art where otherwise they wouldn't have been. Some things don't need fixing.

Reminds me of a thread of conversation that went on over here about whether or not some new crafters think they're reinventing the wheel. There's speculation of a mood in young or new crafters that is ignoring the precious heritage of crafting with phrases like 'this ain't your grannies such and such'. I chalk up most of the scabuttle as a reaction to what businesses, not crafters, do to market their goods to someone who wouldn't otherwise take notice perhaps. I was in Joann's last week for some batting and saw soooo many younger, hipper than normal shoppers milling here and there and nabbing up lots of stuff. I thought what took you guys so long? I'll go ahead and say I was sewing before sewing was cool. I've done it since I was 5 whether it made me a dork, a weirdo, an eccentric or a professional. I've always done it. I do love the new company though. 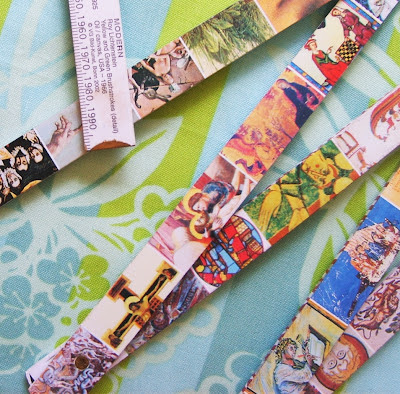 Mostly I am thrilled that people care enough about making to talk about it passionately. I don't care what brings people to learning handiwork, or what frame of mind is fueling their interest. I'm just glad they're here. I'm thankful for all the things my mother and grandmothers taught me. And though I may look at those same techniques with a fresh set of eyes, cleverness is nothing new. Some of the reasons I do it are different than their's were. I'm not trying to reinvent the wheel. (Although I believe Kath already helped us do that for certain!) There's no need to change or fix some things. You know, if it ain't Baroque.