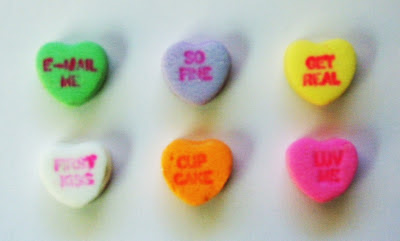 So I've been tagged by weirdness in bloggityville, and I'm gonna be a good sport. But I'll make one thing clear first. Every weird thing I could come up with really seemed normal within circumstances. I think this is more a list of 6 things I might not otherwise talk about that makes me a little unique. Weird just seems weird if you assume what's on the opposite side of it is normal. After awhile normality starts seeming weird. Like when you know you've spelled a word correctly but, when you put it in a different font and stare at it long enough, you are just certain it's mispelled, but it's not. It's relative to experience and perspective. Some of it is just funny history, but I find it to be defining history. So it therefore defines me. Weird, normal, or somewhere in between, and hopefully just barely entertaining.

*When I was a kid, I used a Greek term constantly thinking that I was actually speaking English, because we said it in the house so much. It wasn't until around 1st grade that I learned from Becky up the street that "etsi-k-etsi" didn't mean "kinda". She looked and me and was like, 'why do you always say that weird thing?' 'What weird thing?' 'That eti-sketi word!' I was insistant that everyone knew what that meant. I don't know who it was that finally got to the bottom of it, but I still think it in purely english situations.

*You wouldn't know it unless you looked into my nostrils, but I have a very crooked nose on the inside. Straight on it looks normal, but I have what is called a deviated septum. I'll pass on taking a picture of it, just make me look up at the ceiling next time I see you, and you'll see what I mean....very clearly

*When I was at a college football game with my first serious boyfriend I got so mad at him that I knocked his two front teeth out. It wasn't totally intentional, but I didn't mean not to hit him either. We were sitting with all his cool-guy fraternity brothers and he stood at about 6'3" and 220lbs to my 5'7" and 125lbs (at least then). He took off with his bloody two teeth in hand and I couldn't find him for days. He came to call me slugger affectionately and we continued dating until I met Jeff. He is now happily married with 3 beautiful children who likely get a real kick out of his fake teeth. Jeff used to tease me by ducking when I got mad.

*Speaking of the love of my life, dear Jeff. We started dating when I was 18. I was a teenager who had never babysat, ever. No interest in kids, babies, diapers none of it. I thought maybe I would have 1 child around 38 and be done with it and get back to my normal totally cool art studio living in NYC one day. When Jeff and I would hang out and watch TV or go out to eat, he would always make comments on cute babies "Oh look at that one!" ~ "Anna come see the baby on this commercial, quick!" I was like -whatever. I was also like -pregnant 3 months later. And 5 kids (last I counted) for the reluctant nuturer. Go figure.

*And speaking of pregnancy, I have certainly sat in the friggin o.b. office enough to hear about every complaint, craving and myth known to womankind. But my all time weirdest craving that I never heard from anyone else was for snow. I was so thirsty and nothing would quench it, and I really really really wanted snow.

*When I plan food for entertaining, I have to admit intentionally planning at least twice as much as I need. That amount is the completely normal amount for me to plan. I am not happy unless there are obnoxious amounts of food leftover. It's like an embarassment if my company actually finishes even one dish completely. What if they really did want more and it just wasn't there. This is the only way I am sure. I am always doing the what if they could be happier bit in my head. Like rearranging my sleeping child's limbs in a way that looks more comfortable. I know those are two weird things but it's kinda all rolled into one thing. Well you know, etsi-k-etsi.

Heather, Sarah, Kathy, Kim, Alex & Gina, consider yourself tagged. (And Gina you are only allowed to be weird as it relates to quilting)