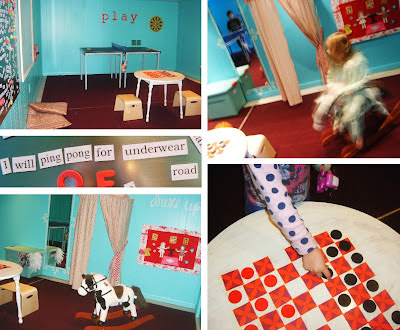 As promised I'm sharing the revealed Christmas secret of the kids' new game room. We have had this empty room off the garage packed from wall to wall and ceiling to floor with storage stuff. When clearing some things out last month, I had the thought to make a new space for the kids to have some old-fashioned fun. You remember ceratinly. Nothing electric except a lightbulb ? Remember what that was like?? So the first step was to put a new doorknob and lock on and get to work either while they were at school or asleep. I enlisted Juliana because, well, it would have been impossible without her. And this is mostly a younger kid space, and she took as much excitement in planning all the activities as I did.

So after painting a playful color and throwing down a few cheap industrial rugs from Home Depot, the real fun started. We bought a junior size ping pong table, a safety dartboard, a rocking horse (that winnies and gallops when you press his ears....so okay there is more than just the lightbulb, but totally acceptable, Eleni glows when she hears it, anyway), a pair of bent plywood stools a tub for dressup clothes, a mirror and a mini basket ball goal.

We made lots of stuff....a 4'x4' sheet metal magnet wall with homemade magnetic words to inspire some major silliness and composition... a 4'x4' framed dry-erase board to inspire even more silliness, some score keeping and some artistry....a checkerboard table was fashioned from an unused old playroom table, and squares of decoupaged fabric to form the checker, and some painted wooden discs for the playing pieces. We also fashioned a semi-circlar dressing room that hangs from the ceiling to inspire...uhh...modesty. Then there's the feltboard I made that features Eleni and Isabela. Currently the felt attachables have them visiting the museum with printouts of famous paintings stitched to felt , and I'm sure these felt girls will go lots of other places in the future. 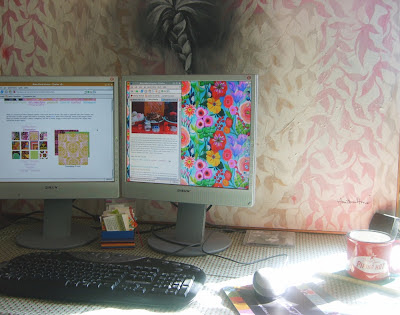 So while they play away downstairs this morning, I am working away up here in the studio. It is my own form of grown up playing though, admittedly. I've been updating my website some. I will be meeting with a lot of clients in a fews weeks so I have lots of product concept presentations to make. That just means I get to cut up all my art on the computer and put it into to pretend images of lovely things. I really am in my playroom. 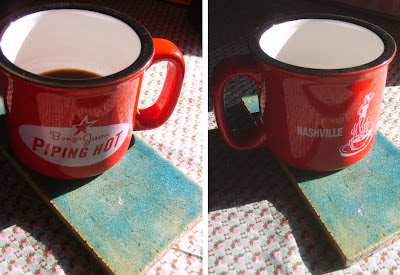 My new year is also filled with some very useful amusements. My brother-in-law Jason gave me this fabulous little coffee cup. What's better than a cool cup that will become your daily standard? Nothin' is what. And at the same time I can exhibit a little local pride for my favorite coffee house.

Back to work, for lack of a better word for what I get to do....most of the time.